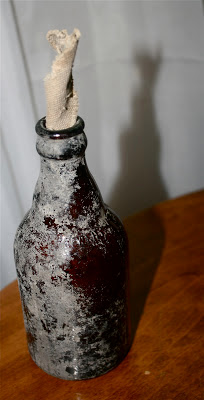 I found this molotov cocktail bottle with a dusty canvas strip down inside it when I was 14 exploring Corregidor Island.  We had crawled into an (American) underground bunker/foxhole, and in the dim light I spotted this bottle half covered in dirt along the bunker wall.  It was 1995, during the 50th Anniversary celebrations of the end of WWII.  Now the bottle is over 70 years old; a San Miguel beer bottle.  It's good to know the GI's were drinking decent beer.  I always wonder how old the hands were that cut/tore these canvas strips off their (most likely) packs to make these makeshift bombs. Was he 19? 22? Did he survive? 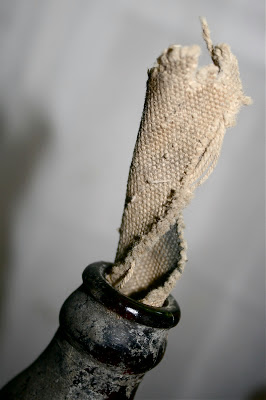 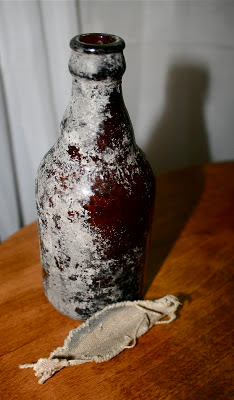 
"You probably read of the miracles wrought by sulfanilamide in the first battles of Africa.  Doctors and men both talked about it constantly, almost with awe.  Doctors knew it was practically a miracle drug, but they hadn't realized quite how miraculous.     Every soldier was issued a sulfanilamide packet before he left England, some even before they left America.  It consisted of twelve tablets for swallowing, and a small sack of the same stuff in powdered form for sprinkling on wounds.  The soldiers used it as instructed, and the result was an almost complete lack of infection.  Hundreds were alive who would have been dead without it.  Men lay out for twenty-four hours and more before they could be taken in, and the sulfanilamide saved them.

It was amusing to hear the soldiers talk about it.  Sulfanilamide was a pretty big word for many of them.  They called it everything from snuffalide to sulphermillanoid."
-- Ernie Pyle, 1942, Africa, Here Is Your War, p. 73


"Covering my head with my arms, I rolled to get out of his way, but his feet caught me in  the side and mashed my ribs a little.  The trooper scrambled to his feet and still in his harness ran over and asked if I was hurt.  'No,' I replied.  'But from the bottom you've got the biggest feet I've ever seen.'
He apologized for landing on me, then taking his chute headed in the direction of the trucks.  Limping along behind I heard someone yell, 'Look out'; almost overhead a man came hurtling down with an unopened chute.  It was pulled out of the pack tray, but remained closed, a streamer.
The man hit a few yards away, making a sound like a large mattress going 'floomp' against the ground, and for the second time in a week I witnessed a man hitting the ground so hard that he actually bounced.  Limping over, I looked down at him and nearly fell over when he opened his eyes and asked, 'What happened?'
'Your chute didn't open,' I told him.
'You're kidding,' he said.  'Help me up, I've got to get going.'
'You're not going anywhere,' a sergeant said as a jeep pulled up, 'except to a hospital.'  The man on the ground protested, saying that he had to make another jump that night.
When he tried to get up all he could do was raise his head a little, then fall back to the ground.  It was then I noticed the crosses on his collar; who else but a chaplain could fall 1,000 feet with an unopened chute and live?  He had suffered a broken leg and internal injuries, but just how bad I never did find out.  The noncom told him to lie still until the meat wagon came; the medics would take care of everything from here on out.
'Ive told you a thousand times to check your canopy first when you leave the plane; let this be a lesson to you,' (the sergeant said)"

"Small private wars erupted to the right and left, near and far, most of them lasting from fifteen minutes to half an hour, with anyone's guess being good as to who the victors were.  The heavy hedgerow country muffled the sounds, while the night air magnified them.  It was almost impossible to tell how far


away the fights were and sometimes even in what direction.  The only thing I could be sure of was that a lot of men were dying in this nightmarish labyrinth.  During this time I had no success in finding anyone, friend or foe.  To be crawling up and down hedgerows, alone, deep in enemy country with a whole ocean between yourself and the nearest allies sure makes a man feel about as lonely as a man can get."

"Of all the American troops who were about to bust their traces to get into battle, I suppose the Rangers were the worst.  That was because they had been trained like race horses, and if they couldn't race every day they got to pawing the ground.
They had one specific and highly dangerous job to do.  And they did it so expertly that they suffered almost no casualties and spared all the Frenchmen's lives.
As you know, the Rangers are American commandos.  For months their training had been a violent, double-barreled curriculum of body toughening and scientific elimination of the enemy.  All summer and fall in the cold waters of Scotland, troops of Rangers had practiced until they were as indestructible as Popeye and as deadly as executioners.  Then they had had a shot of the real business.  A few had gone to the Dieppe raid, and all of them had come to Africa.
Since the specialty of the Rangers is landing on enemy beaches and storming gun positions, I asked one of them, "Do you suppose you'll just have to sit here until we invade another continent?"
"My God, I hope not!  It might be too long a wait," was the wistful reply."

Posted by WWII Files at 1:16 PM No comments: