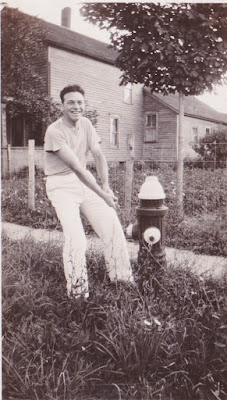 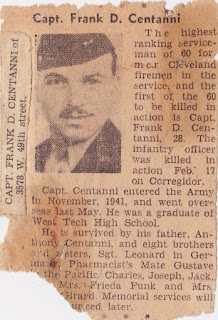 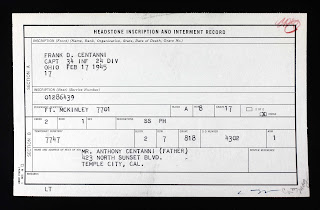 
He was the middle child of 7 Centanni siblings (3 brothers, 3 sisters- he was the only siblings to die during WWII)
1915-1945
(photos courtesy of L. Bogart) 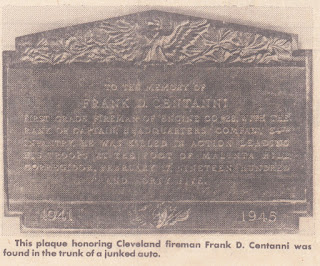 'Plaque found in the trunk of junked auto':
"To the memory of Frank D. Centanni, First Grade Fireman of Engine 28, with the rank of Captain, Headquarters Company, 34th Infantry, Killed in Action, Leading his troops at the foot of Malinta Hill, Corregidor, February 17, 1945."

Posted by WWII Files at 8:06 AM No comments:


It is in fact the largest American WWII Cemetery of troopers buried outside of the US in the world. There are 17,201 buried, and the large monument with the "tablets of the missing" have 36,285 names inscribed in marble, (on 152 acres) .


I added up all the MIA inscribed names in the 12 WWII cemeteries in Europe and there are 17,647 missing in action names listed. This is less than half of the 36,285 names of the missing in action chiseled into the walls in Manila.

Of course there are many other American cemeteries of WWII dead in Europe which Collectively outnumber the war dead buried in Manila. I am only trying to show perspective to those who've visited the European cemeteries, and have not been able to visit the Manila cemetery.

Suffice to say; it's the largest concentration of WWII dead outside the US on a relatively small geographical plot comparatively.

I was so fortunate to visit this cemetery numerous times throughout my life growing up in the Philippines. It was always very peaceful when we were there, and sometimes we were one of a couple visitors, sometimes the only ones. We would purchase food and picnic at the cemetery, and spend a few hours each time; sitting in the shade of the many trees, laying in the grass, walking the thousands of graves and reading the inscriptions, and reading the tens of thousands of names inscribed among the tablets of the missing. I specifically remember from the time I was young until I was an adult laying in the grass among the tightly concentrated graves, just letting the weight of all that it represented sink in. I remember seeing the undersides of the crosses and Stars of David as from the ground the white marbled gravestones were as far as the eye could see in any direction. I also remember being there during heavy rainstorms and finding shelter in the tablets of the missing memorials.. the wind blew the rains in to make it slippery, but it was a heck of a shelter from the storm-- surrounded by the names of the missing in action.
I really appreciate that my parents thought it so valuable to make the trip from where we lived in Antipolo to the cemetery to spend time there on so many different occasions.

Most of my friends have not have the chance to visit this cemetery, so I found some of my favorite photos online (thanks Internet- sources on the photos) to show what it looks like. The graves are arranged in a circle pattern around the two halves of the pillars of the missing which come together to form another "circle" in the center of the cemetery. The aerial photo shows the layout best.
It's beautiful, and easily one of my favorite places on Earth.


"This was to be the basic material from which the patrols were manned throughout the war in the desert.  New Zealanders, Guardsmen, Yeomen, and Rhodesians.

The New Zealanders were tough, self-reliant individuals with an earthy sense of humour and an indomitable spirit.  They could bear almost any hardship with a shrug of the shoulders and a determination to take more if it was necessary.  I found them slightly aloof and a little suspicious of me at first for they did not know what kind of man I might turn out to be.  They were wary of British Officers whom they sometimes suspected of being ignorant fops.  But once they realized that you were prepared to muck in with them and did not wish to stand apart they were not only most entertaining company, but they became wonderful friends.

There is hardly any need to describe the Guardsmen.  Their characteristics as soldiers are so well known and written in the immortal pages of three hundred years of military history.  Even the worst of them are good, and let it suffice to say that we were fortunate in that we had the best.

The men of the Yeomanry units were those with whom I lived and fought when I took command of them in 1941, and I have never known such comradeship before of since.  They were mostly countrymen, and thus knew how to move silently and how to outwit their enemy, for they had done it often enough as poachers. They were the salt of the English earth and I never doubted their worth. 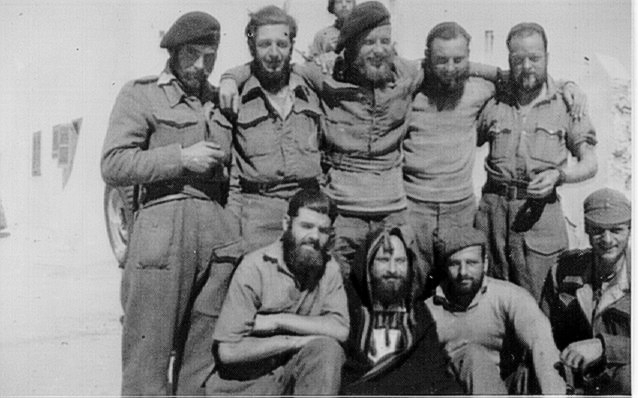 The Rhodesians served with me throughout the war and I saw a lot of them.  It took me most of that time to know them well and then I knew how very friendly they were.  They are naturally reticent and use few words.  Quiet and unassuming they seldom spark, but behind this rather forbidding facade there lies a loyalty, a kindness and a spirit which is unconquerable.  As soldiers they were unique in that one knew that they would never get into bad trouble for their emotions were not subject to excessive changes of temperature and they were, therefore, preeminently reliable."