Brothers Max Rudolph and Lorian PILGRIM Died Within a Month of One Another; 1944; MEMORIAL DAY 2020


Lorian Daniel and Max Rudolph Pilgrim were born July 28, 1918 and April 1, 1920 respectively.  They were 4th and 5th of 9 children in a hard-working farming family in Thomson, McDuffie County, Georgia.  Max Rudolph enlisted 27 November 1941, a little over a month after his big brother Lorian enlisted on 10 october 1941 (both prior to Pearl Harbor December 7, 1941).

Lorian was sent to I Company, 1st Infantry Regiment, 6th Infantry Division, a little known unit that slogged brutal battles of combat and survival against the Japanese and the environment in the Pacific.  Rudolph (as Mas was known by his middle name) was sent to HQ Company, 3rd Battalion, 66th Armored Regiment, 2nd Armored Division- the famous 'Hell on Wheels' division.

Lorian trained for jungle combat at Milne Bay from January 1944 to May.  Late May 1944 came the order to combat load for his baptism of fire with the 6th Infantry Division at Maffin Bay, New guinea.  During the battle of Lone Tree Hill Pvt Lorian Pilgrim earned a silver star 24 June when:

By July 10 1944, the 1st Infantry Regiment of the 6th Infantry Division landed on an 800-yard front east of the Wewe River on the Sansapor Coast, New Guinea.  3rd Battalion landed a day later, and carried out intense patrolling in the area.
Unfortunately, the biggest enemy of the 6th during their time at Sansapor was not the Japanese, but the mite-born bacterial infection of scrub typhus.
More than 1,800 men were struck down with the infection.  During the horrific epidemic more than 300 men at a time were being treated in a medical clearing station meant for 200 men.
On 30 August 1944 Pvt Lorian Pilgrim succumbed to the disease.

Pfc Max Rudolph was killed on the during the drive for St. Gilles during Operation Cobra.  Combat Command A was a combat team of the 66th Armored Regiment and 22nd Infantry Regiment.  By the evening of the 25th 3rd Bn of the 66thAR and 22IR had reached the line that stretches approximately between Hebecrevon and La Doriere. 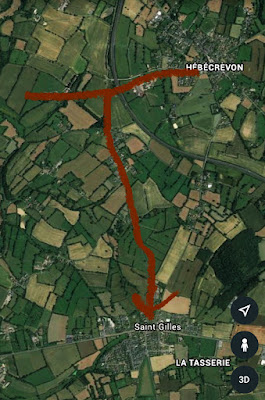 The next morning they jumped off towards St. Gilles.  Unfortunately, exactly where Max Rudolph Pilgrim was killed is unknown, but it was between Hebecrevon/La Doriere and St. Gilles on 26th July 1944.

At left is a google map of the line of departure between Hebecrevon/La Doriere the night of 25/26 July 1944. The arrow is the drive towards Saint Gilles where Pfc Max R. Pilgrim was killed June 26, 1944.


Within days of Max's death, Lorian would begin fighting for his life during the typhus epidemic at Sansapor.  It is not known if during the 35 days before Lorian's death of Tsutsugamushi fever (scrub typhus) that he read of his brother Max's death in a letter from home.


On 18 February 1949 C.W. Pilgrim, the brother's father would file for his sons to be re-interred at West View Cemetery in Thomson, Georgia. 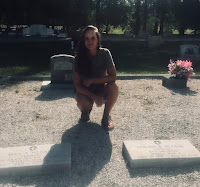 I was able to visit the Pilgrim family and speak to the last living relative of that generation.  Ms. A. Pilgrim graciously allowed me into her home and spoke about the anguish the family experienced when their beloved brothers were killed.  She spoke of how the girls of the town loved Lorian, and how Rudolph was full of life and fun.  She told me how Max Rudolph was hit in the face, and CW Pilgrim was adamant about looking into the caskets 4+years after his boy's deaths to be sure it was his sons.  News was sparse back then, and I only recently discovered the cause of death for Pvt Lorian Pilgrim on Sansapor.  Ms. Pilgrim (a widow of one of the original 9 Pilgrim siblings) allowed me to photograph the painted Army portraits of Lorian and Rudolph that are at the top of this article.

The Pilgrim brothers are buried


side by side in Thomson, GA 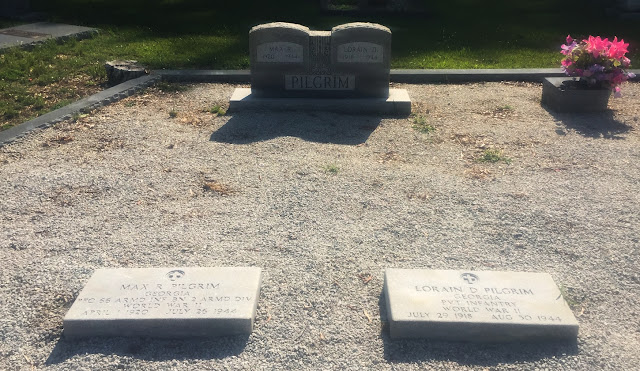 Posted by WWII Files at 7:16 PM No comments:

Today is the 76th Anniversary of Lt Benjamin Cox's death, and what would have been his 28th birthday.
Benjamin Cox was born March 20, 1916 in Portland, Maine to a large Jewish family. After college, he enlisted April 1942 and served as a 2Lt with 2nd battalion 129thIR, 37thID. Thanks to a fellow researcher, Mr. Hubred, I was alerted to the face that Lt. Cox served in F Co.
In a letter to Benjamin's brother, Oscar Cox, Major General Griswold recounted the circumstances around his death. Benjamin's niece has graciously shared this with me.

"Lt Cox was in command of a reinforced platoon engaged in a counterattack against the enemy. Strong and stubborn resistance was met as his platoon advanced. He was hit by a mortar fragment and forced to take cover in view of intense rifle fire. A member of his Command was seriously wounded in an effort to aid him. Lt Cox was seen to rise to his hands and knees when he was hit again by a burst of machine gun fire. He was killed instantly." 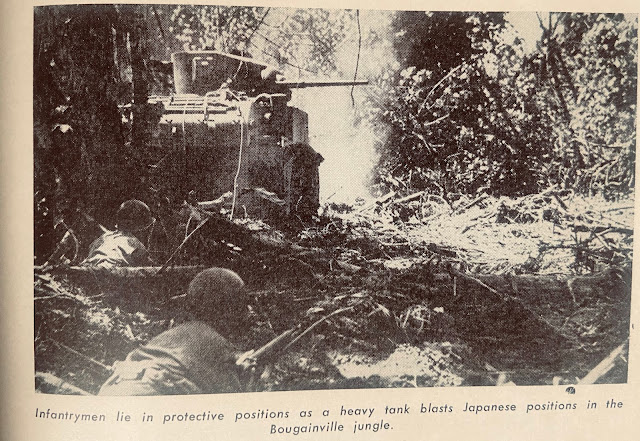 I realize full well the grief that is in your mother heart as you mourn the loss of a loved and loving son, killed in defense of his country. I know that you have other sons to comfort you and I am happy to tell you that one of them, Oscar, is my trusted counselor and friend, a man of whom any mother may well be proud.

My heart goes out to you in deepest sympathy.
May God bless you and keep you.
Very sincerely yours,
Franklin D. Roosevelt" 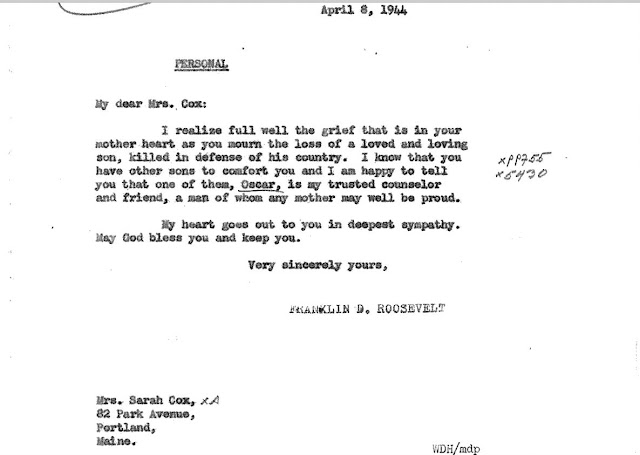 The Bougainville campaign for the 129th was brutal and bloody. "Casualties in the 129th Infantry during the period of the main Japanese assault and in patrol action in the month of March 1944 were 83 killed in action and 422 wounded." In contrast the number of enemy killed in patrol clashes was 151; within the front lines 946, and in front of the barbed wire were 1,431. The Japanese troops that assaulted ruthlessly, wave after wave, were formidable and embedded perfectly into the deep jungle underbrush.


Incredibly, on the day that Lt Benjamin Cox was killed, an article was released in the Boston Record, March 20, 1944- his 28th Birthday. A War correspondent had previously interviewed him and others about the campaign. At that time no one in the States had any idea Lt Cox had been killed. The article is transcribed below:

Bougainville, Solomon Islands (Delayed) (AP). Japanese troops drove fiercely against American lines on Empress Augusta Bay until half a dozen tanks came to the aid of hard pressed infantrymen and in fierce fighting turned back the fourth major assault since March 8.

A full regiment of Japanese imperial infantrymen attacked on a 50-yard front held by a single American platoon.

The assault “was the most vicious in this war and that includes Guadalcanal,” said Maj. Gen., Oscar Griswold of Elko, Nev., commanding Allied forces on Bougainville. He estimated Japanese casualties at between 5,000 and 6,000 for the eight days of fighting.

(A Guadalcanal dispatch dated March 19 listed Japanese dead at 1352. It reported there had been no attacks since the 15th, but there was still evidence that the Nipponese isolated and left to starve on Bougainville were solidly trying to mass for another push. Japanese artillery continued to shell the American-built Torokina and Piva air strips. United States destroyers shelled enemy positions and Navy and Marine dive bombers and torpedo planes attacked gun positions.)

There is only sporadic gunfire now.

“This may mean,” the General declared, “that the Japs are withdrawing and taking up new positions, but I don’t know. Yesterday we thought the Japs were starting another Banzai attack, but it was pretty well broken up by nightfall and was not renewed today.

“The Japs’ newest attempt to break through our perimeter came on the American left flank Wednesday where an Illinois unit is fighting. Before noon Thursday the attack had been completely repulsed leaving the area littered with Japanese dead.”

“We have counted 210 Japanese bodies in this area and there must be many more a hundred yards beyond. Those Japs were told there was a three years’ food supply in our perimeter and they surely fought to get in. They managed to occupy two of our pillboxes. Four or five men in one pillbox were wounded and had to be evacuated just before the Japs took it.

“They kept coming in spite of our heaviest fire. They’d burrow along like moles, digging little trenches to crawl in as they went. One of our hand grenades got one fellow digging in just three feet from our pillbox and a few minutes later there was another crawling in the same trench.”

Cox, one of two officers left in his company, took over the platoon after its leader had been wounded. He said his platoon held despite the enemy charge and enemy mortar fire A half a dozen tanks came in and after a bitter struggle two pillboxes were retaken and a few Japanese remnants driven off.

“I visited the sector this morning,” Cox said. “And over a hundred Jap bodies lay scattered on a small section of flat land. Some were clustered around tree trunks and others were lying in open areas."


Lt Benjamin Cox's body was recovered and buried in a temporary cemetery on Bougainville. His body was later reinterred to Maine. 14 years ago an Australian military contractor was working in Papua New Guinea and purchased a US dogtag at a market. The tag had been found by a local. Mr. Dan O'Sullivan kept the tag and recently contacted the Maine Veterans Service Admin for help in getting the tag home. Due to the COVID-19, Mr. O'Sullivan's plans have been postponed to fly over and return the tag in person. I'm thrilled to share this miraculous turn of events.


Lt Benjamin Cox was beloved by his family and men. He perished in a roasting hot jungle, sweating and exhausted; beside his men who he led and cherished. On his birthday, and the anniversary on his death, we remember him.
Many thanks to Lt Cox's niece, Mrs. E.Cox of Maine. She generously provided the photos and resources for this memorial.
Photos:
1- Lt Benjamin Cox
2- Photo of personal letter from FDR
3- the 129thIR in Bougainville March 1944
4- 129th infantrymen take cover while a tank blasts Japanese positions
5- Points of Japanese penetration along the front line March 1944- the 2nd Battalion took the brunt of it.
6-The found dogtag in Dan O'Sullivan's possession to be returned to the Cox family
7- Photo of Lt Benjamin Cox's grave at Mt. Sinai Cemetery in Portland, Maine
Posted by WWII Files at 6:32 PM No comments: