"One evening on Long Island, James Jones climbed willingly up to the attic to locate a box of war stuff his son had asked to see.  As Willie Morris reports Jones saying while he sorted through the ribbons and their attachments,

'This one here, it's the only one we wore when we shipped home.'  He pointed to the replica of a rifle on a field of blue with a silver wreath around it.  'It's the Combat Infantryman's Badge.'

'Oh shit, I don't know.  It was a point of pride, you see-- better than all the rest.  It spoke for itself.  It really meant something.  It was an unbroken rule.  If you wore any of the others, the men would've laughed you out of town, or maybe whipped your ass.'

The difference is empirical.  The badge was awarded for being in ultimate danger, the ribbons for what somebody said about your behavior-- meaningless and probably corrupt testimony, as most infantrymen knew, having seen their battalion staffs piling up unearned honors.  The CIB you earned without anyone "putting you in" for it.  You knew, and the company roster knew, without anyone's agreement of ass-kissing, what you'd been through to wear it.  It was private, almost secret, telling would-be melodramatists, "Don't ask."  The CIB is the only thing pinned onto Robert Kotlowitz's jacket in the photo accompanying his memoir.  The silence is eloquent, like the modest it betokens."

*In 1947 the US government authorized that any infantryman earning the CIB in WWII was automatically eligible for a bronze star.*
Posted by WWII Files at 11:21 AM No comments:

In doing a little digging into the 2nd Armored in Normandy while reading Mark Bando's "Breakout at Normandy" I found this magazine article with 3 tense, emotional, and very detailed photos. This article was published in YANK Magazine on Sept. 29, 1944 and written by Sgt. Walt Peters. 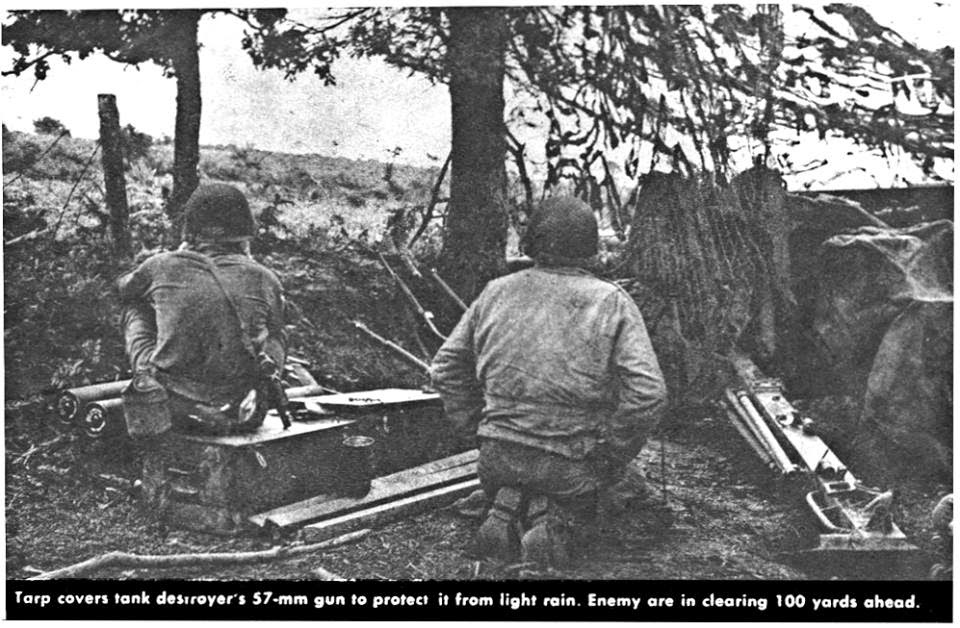 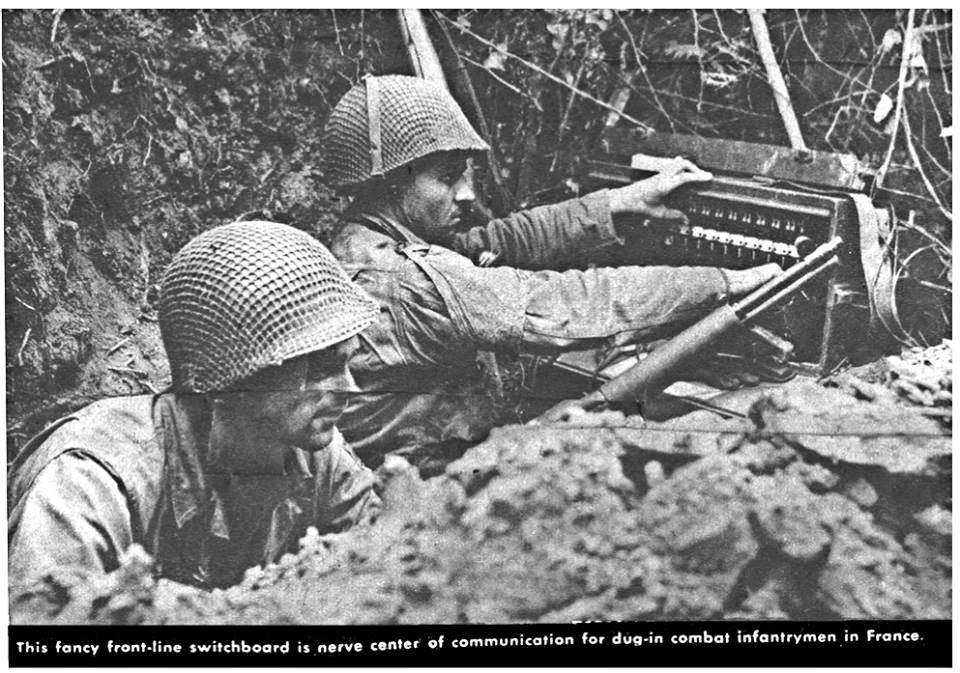 Most photos don't instantly bring tears to my eyes, and a feeling in my gutt of extreme emotion, but the second one here does. The determination and exertion is clear on their faces, as is the stress and exhaustion. .. Dogface if I've ever seen it. 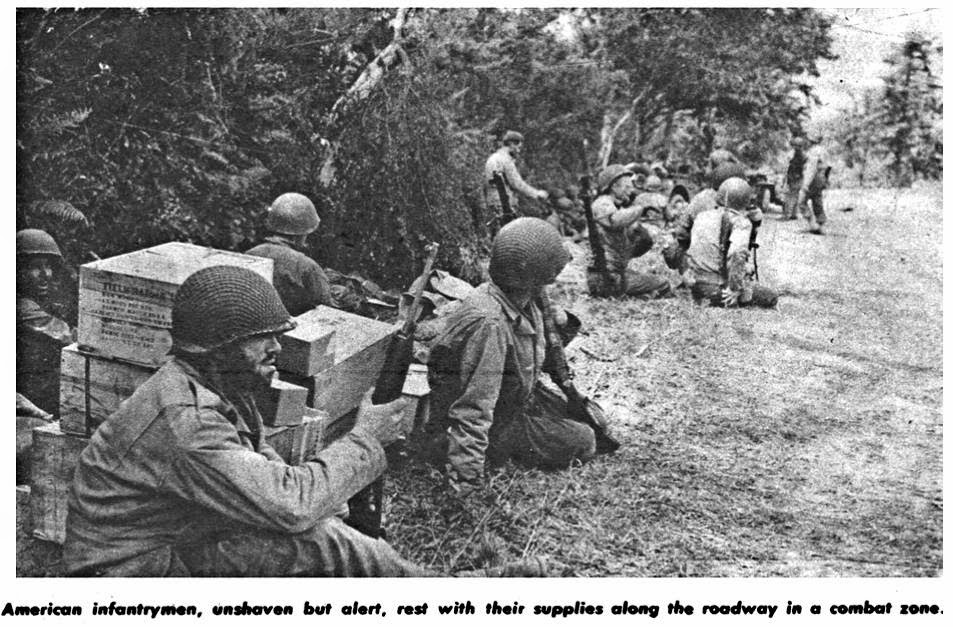 Posted by WWII Files at 9:17 AM No comments:

"The airdromes were full of stories about freakish escapes from death, but the strangest story I heard was that of an airplane and its whole crew that disappeared in mid-air.
This was a veteran Flying Fortress crew.  Its members had been heroes on many missions over Europe.  They were leading a flight of three on their bombing run over a Tunisian port.  The two wing planes were flying close on either side, the pilots following the lead plane, and suddenly it disappeared right before their very eyes.
What happened was a matter of conjecture.  But it seemed very likely that an antiaircraft shell made a direct hit on the plane's bomb load, and that the whole plane blew to tiny bits instantly and just vanished.  Nothing was every seen except a little cloud of black smoke where the plane had been. Then the two other ships were flying alone.  One airman happened to be taking a picture at the very moment of the disappearance.  The film showed two planes and a puff of smoke between.
A direct hit setting off a plane's bomb load had never happened before in the American or British forces.  I think it must have happened to the Germans, however, for I remember a British artillery officer telling me two years ago of a high-flying German bomber disappearing in a flash while he was looking at it through field glasses.
Fellow fliers of the ill-fated American crew were naturally pretty blue over the accident.  But, as they said, when anything as freakish as that got you your number was just up regardless. And they went on with the war as usual."

Purchase "Here is Your War" by Ernie Pyle HERE 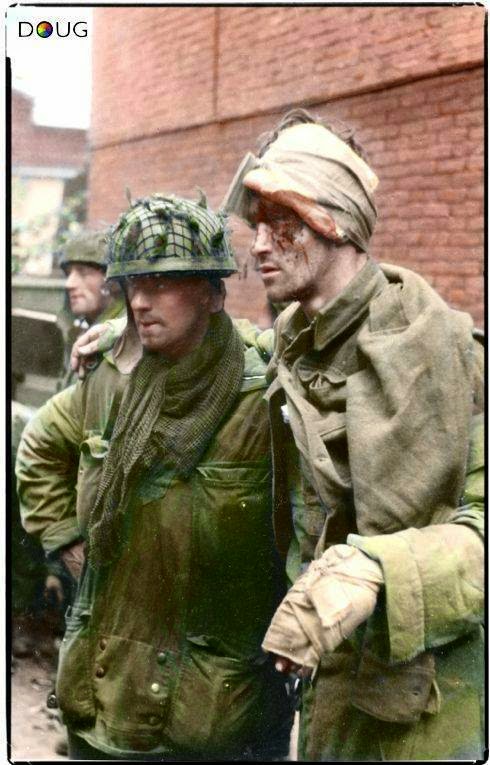 L/Cpl Paddy McGiven, Sapper Charles Grier and wounded Sapper Dick Robb all from B troop, 1 Para Squadron, Royal Engineers. This picture was taken at 1530hrs on Wednesday the 20th September 1944, in a builders yard near their last position held at the Van Limburg Stirum School in Arnhem.
#WWIIPOD
Colorised by Doug: colourisehistory.com
Posted by WWII Files at 10:03 AM No comments: 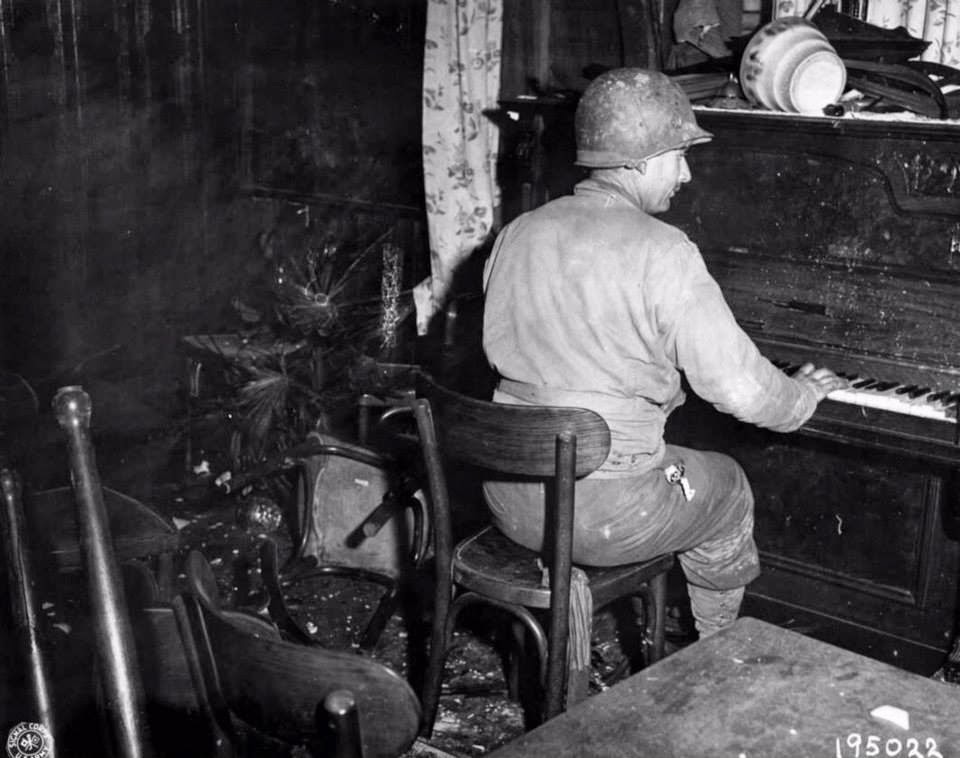 Pfc. R. Larock of E. Co., 119th IR, 30th Infantry Division, relaxes after a day of fighting by playing piano in a wrecked German beer hall; Germany 8th October 1944.
KIA on 10 October 1944 and was buried at the Henri-Chapelle American Cemetery and Memorial in Hombourg, Belgium.
#WWIIPOD
(Thanks to Nathan Tarr for posting this photo and info. onto WWII Pics site.)
Posted by WWII Files at 10:00 AM No comments: