The Los Baños Raid was a feat of magnificent planning, training, execution, risk, and payoff.  It was a complex operation with the potential outcome of high casualties; even massacre.  This operation engaged US Rangers, US Airborne, and Filipino Guerilla fighters in a precision-timed "silent" operation.  With about 10,000 Japanese troops in the hills surrounding the Los Banos prison camp, the rescue of 2,000+ weakened and starving civilian internees was an operation that has since been taught at US military academies as an example of precision and tactical planning and excellence.  This success (ZERO internee casualties, 11 allied casualties, and about 80 Japanese killed) of this raid was overshadowed by the battle for Iwo Jima and the raising of the two American flags on Mt. Suribachi on the same day in February 1945.
The US and guerilla fighters only numbered about 2,000 and were rescuing 2,100+ prisoners.  They needed to sneak in across a lake, have one company of troopers jump to a minuscule jump zone, attack and silence all guards, and liberate and evacuate the camp in broad daylight; all while not alerting the attention of the nearby approximately 8-10K Japanese troops in the surrounding hills.  It was radio Silence the whole time, with a diversion "attack" nearby, potentially drawing the Japanese forces away from the camp.  Again, the chances for extreme losses and even massacre were very high.  All troops; guerillas, rangers, and Airborne had to be ready to execute their mission at EXACTLY the right times, and there was NO room for error, as one failure of each facet of the operation could spell high losses for the rest of the troopers. 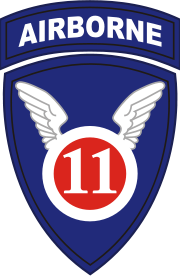 "B" Company of the 511th, 11th Airborne was picked to jump for the mission.  They had been in the Pacific since mid-1944 in New Guinea training for the Leyte landing.  After the fall's bloody and grueling Leyte campaign, the 511th had jumped at Tagaytay Ridge on February 4, 1945; working their way towards Manila.  By mid-February they were heavily engaged at the south side of Manila, fighting along the interlocking pillbox "Genko Line" for the Battle of Manila.
From this point on I will repost "The Los Banos Raid" written by 1st Lt. John M. Ringler of his experience commanding "B" Co. for the Los Banos Raid operation:


~~Written by K. Mishler with article by John Ringler
Posted by WWII Files at 12:31 PM No comments: