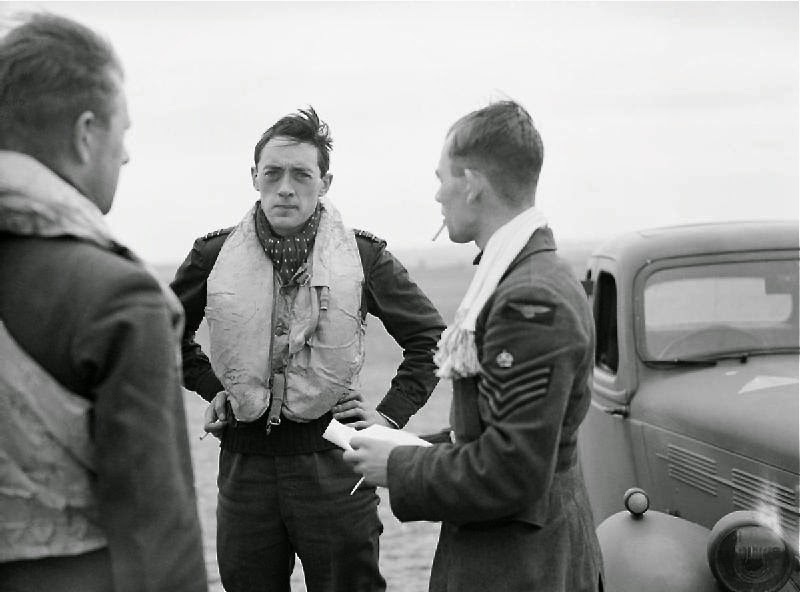 
The average age of an RAF pilot in 1940 was 20. The strain they were under is clearly written on the face of Squadron Leader B J E 'Sandy' Lane (centre), pictured here aged 23. He was killed in combat 2 years later. (IWM CH1366)
(Photo commentary by Michael Kearney- see next photo for extraordinary research and colorization by Paul Reynolds.)
Read more here: http://www.theguardian.com/artanddesign/2010/apr/22/battle-of-britain-photography-exhibition 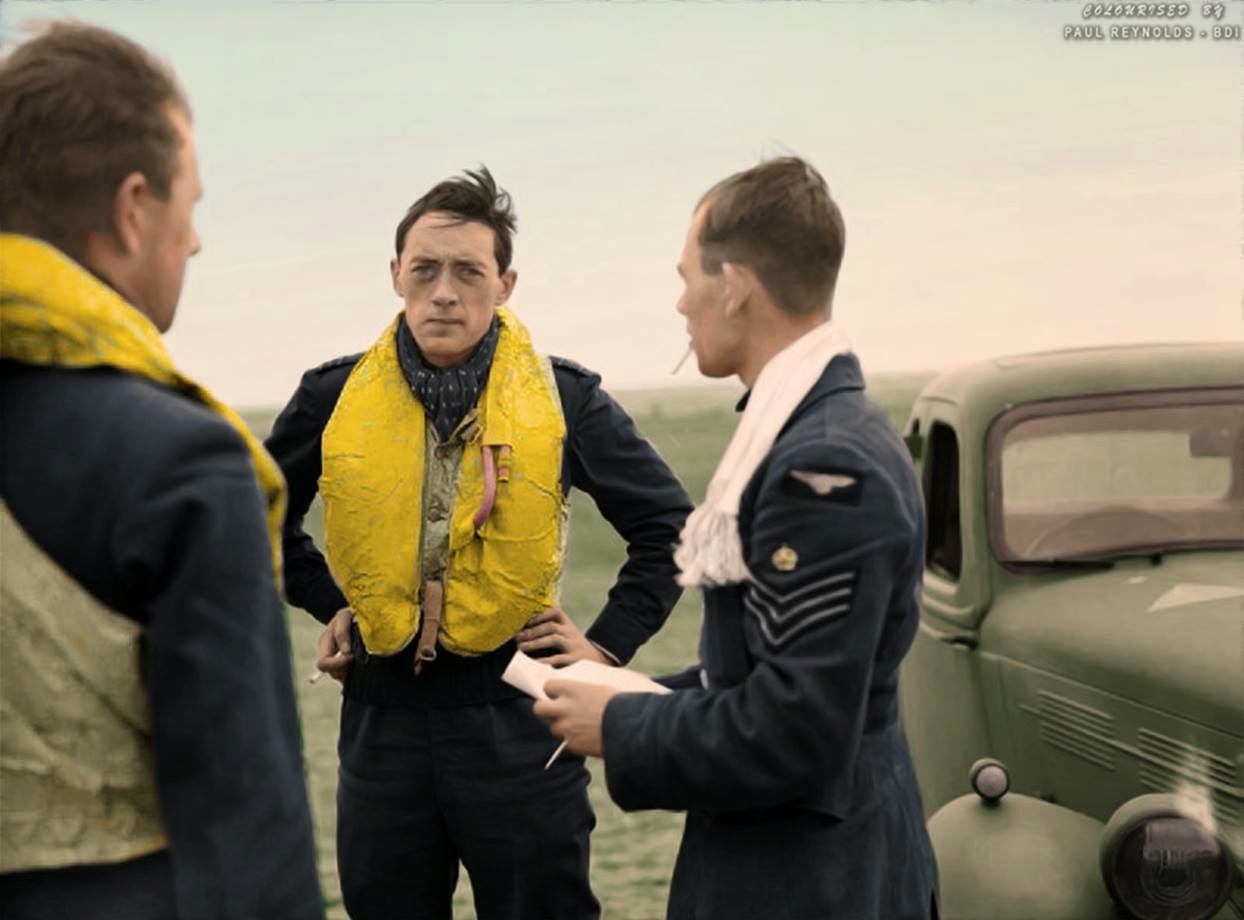 Brian 'Sandy' Lane is pictured, in the middle, immediately after a Battle of Britain sortie in September 1940. The strain and exhaustion on his face belie his young age and make this one of the best known and most powerful images to come out of the Battle of Britain.

* Flight Lieutenant Lawson has consistently led his flight, and frequently his squadron, with great skill and courage and has destroyed at least five enemy aircraft. His exceptional coolness inspires great confidence in his fellow pilots. On two occasions he has refused to abandon his aircraft when damage caused would clearly have justified such a course.

This is what some of Lane’s fellow 19 Squadron pilots and crew thought of him:
Flight Sergeant George "Grumpy" Unwin DFM: "He was completely unflappable, no matter what the odds, his voice always calm and reassuring, issuing orders which always seemed to be the right decisions."

Sergeant David Cox: "Quite simply Brian Lane was the best CO [Commanding Officer] I ever served under, in every respect, and when my turn came to lead, I modelled myself on him."

Corporal Fred Roberts: "...he was an absolutely wonderful man. Early on in the war, some of the officers could still be a bit snobbish, but not Brian Lane, who knew everyone in his command, no matter how lowly their rank or status, by their first names."

His service-wide nickname was "Grumpy" supposedly after he complained about the noise squadron comrade F/O Douglas Bader made repairing one of his leg prostheses late at night in late 1939. It kept Unwin awake and he let everyone know about it. Another story relates that it was due to his reaction at being left out of the squadron's operations during the Battle of Dunkirk on 26 May 1940, due to a shortage of aircraft.

* This airman has displayed great courage in his attacks against the enemy and has destroyed ten of their aircraft. On a recent occasion, when returning from an engagement alone, he intercepted a formation of enemy bombers escorted by about thirty fighters, and destroyed two of the fighters. He has displayed skill and courage of the highest order.
** This airman has shown the greatest keenness, courage and determination to engage the enemy. He is an outstanding fighter pilot and has destroyed a total of thirteen enemy aircraft and assisted in the destruction of others.

There is much more to the careers of these brave pilots, this is just a little part of the history about a few of "The Few".

*About his Mae West, some may notice his Mae West should be light green/olive, it is in fact an early MW but the lobes are painted over with yellow roundel paint as was the practice of many pilots pre 41' yellow MW's.
I guess they wanted to be seen if they ditched in the sea
You can notice the paint cracking near the collars and the original colours where not painted.

If you got this far thanks for reading and remembering.